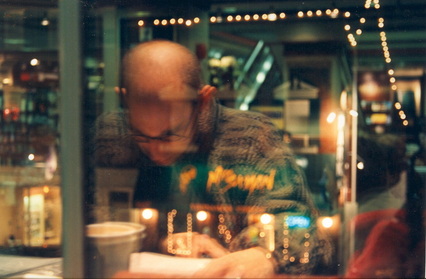 David Heatwole is running for the position of Arts Ambassador of West Virginia for a three-year term starting January of 2015 – 2018.

I will foster relationships with all national Not-for-Profit arts councils and learn of the various marketing techniques that has worked successfully for them and share these discoveries with other organizations and artists that need creative marketing assistance.

It would be my duty to represent all artisans to the best of my ability, and to develop systems of support that will help the artists survive while creating. From the undiscovered “starving artist” to the already established and widely accepted main stream artists, I plan to put my best foot forward to represent their needs and to encourage dialogue between the various professions (ie. Government, clergy, plumbers, engineers, fast food restaurant workers, et all.)

There is a new movement underfoot in the arts and it is time for artists to rise up and move the people. It is my goal while working as the official Arts Ambassador to show artists how they can do just that.”

David Heatwole founded the not-for-profit, art-for-charity organization known as the Transcendental Arts Council back in 1994. It was operational as a 501(c)3 from 1999 to 2005. It worked on behalf of artists and society in the States of Virginia, Maryland, West Virginia and Pennsylvania. Heatwole is ready to take it to a new level under the new name of The Arts Collaborative.

He has been a leading proponent and spokesman for what he calls the International Synergy Movement, which is a current trend or “art movement” in the fine art realm that has yet to achieve the historical recognition that it deserves.

He is the Curator of The Fine Arts Company in Hagerstown, Maryland. He is principal of the business My Art Brokers, and runs a gallery called Exhibitions Art Gallery both located in

Martinsburg, WV. For three years beginning in 2006 Heatwole published The Main Artery – a grassroots Creativity and Fine Arts Journal that served the quad-state region of MD, WV, VA and PA.

Heatwole has served as board member and President of various arts organizations in the West Virginia Eastern Panhandle.

In addition to painting and sculpting in his spare time he also demonstrates painting techniques and lectures on various topics.

There have been numerous articles about Heatwole’s community art activism and fine art. Including The Washington Posts – Loudoun Extra, Loudoun Magazine, The Journal News, Times Mirror,

Daily-News Record, Frederick Gazette, Frederick News Post and many more.David has been married to his wife Dawn for 13 years to and is the proud parent of 5 children.